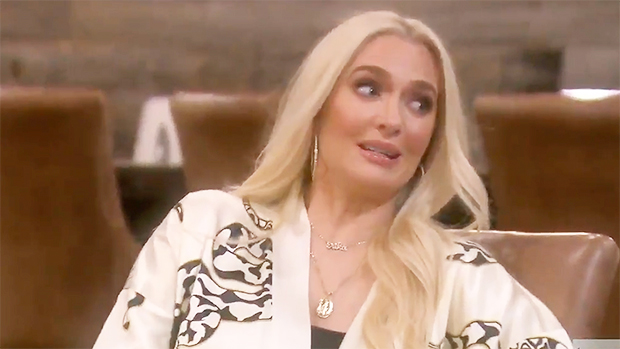 It’s the moment ‘RHOBH’ viewers have been waiting for — Erika Jayne’s divorce news finally surfaced during the June 9 episode.

The ladies’ Lake Tahoe trip finally came to an end during the June 9 episode of The Real Housewives of Beverly Hills, and just four days later, everyone finally learned about Erika Jayne‘s divorce. But because she didn’t even hint at a split with husband Tom Girardi in the days leading up to her public announcement, everyone was shocked.

Kyle Richards, Lisa Rinna and Dorit Kemsley all learned about the divorce from a text Erika had sent them, and they couldn’t believe what they were reading. In her message, Erika said, “Ladies, I truly consider you my close friends and this is why I’m reaching out to tell you that I filed for divorce this morning. Thank you for supporting me. This will be tough.”

Immediately after reading the text — and picking their jaws up from the floor — the ladies jumped on a joint FaceTime call to discuss the news. A stunned Dorit asked Kyle and Lisa, “What is going on? Did you have any idea?”

“I had no idea!” Kyle yelled before adding, “What the hell!” Lisa then theorized: “It’s Erika, so she had to do it like this. She couldn’t tell anybody.” We’re not quite sure what she meant by that, but maybe time will tell.

“It’s a long time to spend with somebody to all of a sudden be done,” Kyle then added, acknowledging Erika and Tom’s 20-plus year marriage. “It’s sad,” Lisa said, and Dorit agreed: “It is”.

A post shared by Reality TV Shows & Much More! (@therealitytvsource)

Nothing more about the divorce was said. In fact, the episode ended immediately after the big reveal, but interestingly, while the ladies were still in Lake Tahoe, Erika briefly mentioned to Garcelle Beauvais that Tom is often buried in his work. She said she was totally fine with it, though, because he loves what he does. So just four to five days before she filed for divorce, she was (once again) praising Tom. We’re stunned.

Earlier in the episode, Sutton Stracke tried coming to some sort of understanding with Crystal Minkoff (she didn’t think she had anything to apologize for), but Crystal wasn’t super interested. Especially after Sutton allegedly walked in on Crystal naked and made some sort of comment about her doing something inappropriate. At least that’s what Crystal claimed during their second awkward conversation of the night. The first one went down on a boat ride, and Crystal sort of scoffed at anything Sutton tried saying, which only set Sutton off even more.

To be honest, we’re not totally sure this show is for Sutton. She spent nearly the entire hour rubbing her face with a soother to stop herself from crying. Then, she blamed her emotions on the fact that she’s moving out of her longtime house and hasn’t truly dealt with her feelings about it yet.

Anyway, in the end, Sutton told Crystal she’d send her a bouquet of flowers upon their return to Los Angeles, and they hugged, but we don’t see these two ever becoming friends.

Meanwhile, the cast also talked about what plastic surgery they’ve had, and only a few admitted to getting a nose job. Dorit, however, said she has never gotten a nose job and producers mocked her for it by showing the before and after photos seen below. They’re so shady!

Finally, Garcelle continued to go after Lisa Rinna for her attacks on Denise Richards last season, and while we love Garcelle, we’re over talking about Denise. Unless she’s coming back and finally opening up about her alleged hookup with Brandi Glanville, then we don’t want to hear another word about her. Sorry, Garcelle. But basically, Garcelle just told Lisa that she needs to learn when to keep quiet — especially when things don’t concern her.


The Real Housewives Of Beverly Hills