‘RHONJ’ Recap: Melissa Gorga Suspects Joe May Be Cheating On Her Amid Marital Issues 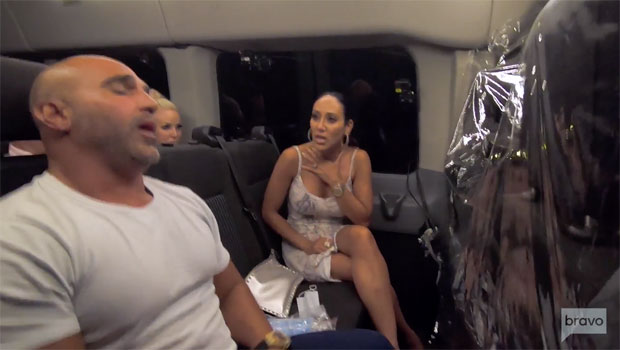 Melissa and Joe Gorga nearly reached a marriage breaking point during the April 7 episode of ‘RHONJ’.

This week’s new episode of The Real Housewives of New Jersey was supposed to be about Teresa Giudice and Joe Gorga‘s father’s memorial, but a fight between him and wife Melissa Gorga nearly derailed the entire event.

It all started when Joe and Melissa got into a fight over how much he thinks she’s “changed” since they first got married. He always wanted her to be a stay-at-home mom, but now she’s a successful businesswoman and it’s been rubbing him the wrong way. He said they may be “growing apart”, while she called him “spoiled” for wanting so much attention from her. It was a huge screaming match and everyone who had to bear witness to it felt really uncomfortable.

Joe and Melissa’s fight lasted through the night, but they eventually squashed their beef for a bit since everyone was about to get together for Joe’s dad’s memorial. However, there was still some awkwardness in the air, and it didn’t help that Joe kept getting endless phone calls from someone named “Realtor Gizelle” while everyone was out to lunch.

After a boat ride, everyone took a lunch break. And when Joe walked away from the table to take a few phone calls, Melissa started becoming suspicious. Then, Frank Catania asked Melissa why Joe kept getting up from the table and she didn’t really have an answer for anyone.

But when Joe’s phone started ringing again, when he later walked away from the table without his phone, Melissa answered it. She wanted to know why this woman kept calling her husband, but the call cut short as soon as she answered.

When Joe came back to the table, she asked him about it, and that’s when she also realized that she was the victim of a prank. After she and Melissa played a similar prank on him a couple weeks ago, he wanted to get revenge, so he and Frank orchestrated the whole thing and she nearly fell for it.

Meanwhile, Margaret Josephs and Jennifer Aydin continued their own fight from last week, when Jennifer said it was a “red flag” for Margaret to scold her husband like she did last week. Margaret disagreed and also clapped back at Jennifer for mocking the fact that she once slept with her boss. It’s pretty obvious that these two don’t like each other, and we’re okay with that.

Finally, Teresa and Joe’s kids joined them for a special memorial to celebrate Nonno. Gia tearfully gave a speech and it gave us major flashbacks of her “Waking Up In the Morning” song that recently went viral on TikTok.


The Real Housewives Of New Jersey