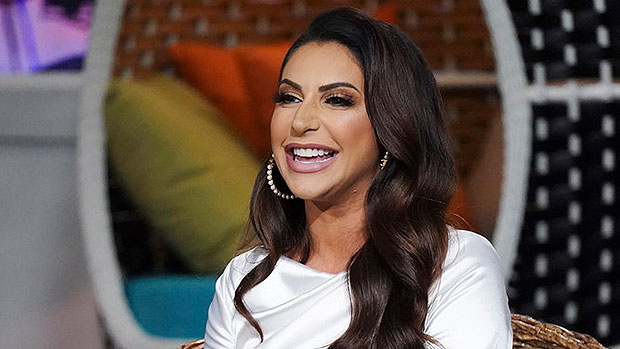 Jennifer Aydin may be showing off a whole new look when Season 12 of ‘RHONJ’ premieres, as she just teased a possible new face.

Jennifer Aydin is the wife of a plastic surgeon, so we’re not too surprised to find out that she’s dabbled in changing up her look here and there. However, the Real Housewives of New Jersey star started an uproar on Instagram this week, when she seemingly debuted a new nose.

The 44-year-old posed for an Instagram photo on July 29, wearing a pink outfit that matched her Versace heels, and fans couldn’t help but notice something new about her face. But to be fair, the speculation about Jennifer’s nose started earlier than that. Jennifer, who’s currently filming the 12th season of RHONJ, first teased fans about her new look in June, when she posted an Instagram photo of herself wearing a mask (see that photo below).

She also appeared to have bandages over her nose, and while she didn’t explain the purpose of them, she did ask her followers: “Notice anything different about me?” She claimed it was only her “new lashes” but she included a wink-faced emoji in the caption, so it seemed pretty obvious that she was teasing her fans.

And then, just a few days later, she celebrated a birthday and struck a pose, nearly showing off her side profile. Jennifer has yet to confirm she’s actually had a nose job, but fans seem to be convinced. “You look beautiful”, one commenter wrote on the “after” photo below, while another added, “Jennifer, you look fabulous!!”

In the past, Jennifer has shared that she’s had a tummy tuck, breast augmentation and PRP hair treatment, in addition to lip and face fillers. So if she has gone under the knife again, we’re happy for her. And we fully expect her to reveal the news when the next season of RHONJ premieres on Bravo sometime in late 2021 or early 2022.


The Real Housewives Of New Jersey